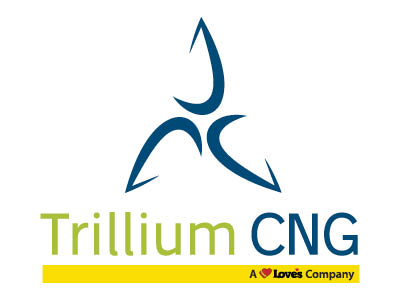 CHICAGO, Nov. 5, 2014 – amp Trillium, LLC, the joint venture between ampCNG and Trillium CNG, today announced that the first public access compressed natural gas (CNG) station in the city of Sweetwater, Texas, has officially opened. Located at 9409 S I-20 Frontage Rd., the amp Trillium station will service Class-8 trucks as well as any CNG vehicle. It is the fourth of seven public fueling stations to be opened as part of a previously announced agreement with Dairy Farmers of America and Select Milk Producers to convert a portion of their diesel fleets to CNG-powered trucks.

Directly en route for drivers heading west out of Dallas and Fort Worth and south from Lubbock on I-20, the amp Trillium station fills a major CNG fueling void in this area of the state. Three Class-8 trucks are able to fuel simultaneously at 10-12 GGE per minute utilizing Trillium CNG’s fast-fill proprietary hydraulic intensifier technology. The station is open 24 hours a day, seven days a week and is accepting all major credit cards.

“We’re thrilled to announce the opening of the first CNG station in Sweetwater, the ideal location for serving the state’s enormous agricultural and oil field industries,” said Steve Josephs, P.E., Director of Engineering and Co-Founder of ampCNG. “The station expands our growing network in Texas and provides the numerous economic and environmental benefits to heavy trucking fleets switching from diesel to CNG.”

The joint venture is set to bring three additional stations to Texas (Brock, Kerrville and Midland) within the next six months. amp Trillium stations in Amarillo, Waco and Harrold opened earlier this year. To celebrate the opening of the station, officials from the city of Sweetwater and the state of Texas, as well amp Trillium representatives, will attend a ribbon-cutting ceremony in early 2015.

“Sweetwater is fortunate to have amp Trillium’s public CNG station right here on I-20. “ said Ken Becker, executive director of Sweetwater Enterprise for Economic Development (SEED), “With about 8,500 tractor trailer rigs passing through on a daily basis, the station will play a huge role in keeping our West Texas air clean.”

“Expanding the number of public access CNG stations capable of supporting Class-8 trucks is a priority for us, “ said Mary Boettcher, president of Trillium CNG. “We’re glad to be bringing natural gas to the Sweetwater market further expanding our station network in Texas, and making the decision by fleet operators to convert their vehicles to CNG an easy one.” Boettcher added, “Fleet operators know we stake our reputation on delivering a great refueling experience for our customers – fast, safe and reliable.”

amp Trillium is a joint venture between ampCNG and Trillium CNG formed in 2012 to build a network of CNG stations across the U.S. to serve the commercial trucking industry.

ampCNG, a Chicago-based energy company focused on displacing liquid fuels with CNG, builds and owns CNG fueling stations for long-haul truck fleets and finances leases for CNG trucks. The company operates the largest US renewable natural-gas plant that produces fuel from cow manure. ampCNG is a member of the Department of Energy’s National Clean Fleets Partnership tasked to reduce the nation’s dependency on imported oil. For more information, call (312) 300-6700 or visit www.ampCNG.com.

Trillium CNG is a leading provider of CNG to fleets, and also offers complete facility design, construction, operation and maintenance services. Our focus is on fueling heavy-duty fleets that require high-performance solutions. For more information, visit the Trillium Homepage.