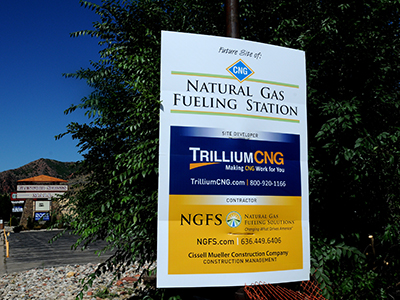 The anchor fleet for the station will be Western Tank Lines; however, the facility is open to anyone that owns a CNG vehicle and is looking to refuel.

The new facility, located just north of I-70 at Exit 114 in West Glenwood, will be open 24 hours a day, seven days a week and will feature one dual-hose dispenser with access from two lanes.

Ground breaking at the site began August 10th. Trillium CNG expects the new facility to be completed and operational by the fall. This is Trillium CNG’s second station in Colorado. The company built and operates the private CNG station in Glenwood Springs that supports the Roaring Fork Transportation Authority (RFTA) for its VelociRFTA Bus Rapid Transit which provides service to Aspen and Grand Hogback service to Rifle.

“Western Tank Lines is excited to integrate CNG trucks into our fleet and fuel at the upcoming Trillium CNG station in Glenwood Springs,” said Al Butler, President of Western Tank Lines.  “CNG presents the opportunity to use a domestic fuel source with lower price volatility than gasoline and diesel while producing fewer tailpipe emissions.

“We are pleased to be able to bring compressed natural gas to Glenwood Springs,“ said Joel Jansen, vice president of Trillium CNG. “The state of Colorado has been at the forefront of the natural gas movement and clearly understands the real environmental and economic benefits CNG provides. Our high performance fast-fill stations are built with the safety, reliability and technology heavy-duty fleets have come to depend on.”

Garfield County has also reached out in support of the natural gas fueling station. “We supported the development of the Glenwood Springs CNG station with a $90,000 grant. We understand the value of using locally-produced natural gas for transportation, and are working to switch vehicles in the county fleet to CNG over the coming years,” said Garfield County Commissioner Tom Jankovsky.

“The Glenwood Springs City Council is pleased to see construction begin on the Trillium CNG fueling station, and we look forward to the station opening this fall,” said Glenwood Springs Mayor Mike Gamba. “Offering public CNG fueling helps diversify our local economy, and will give people an incentive to buy CNG vehicles.”

WEC Energy Group (NYSE: WEC), based in Milwaukee, is one of the nation’s premier energy companies, serving 4.4 million customers in Wisconsin, Illinois, Michigan and Minnesota.

WEC Energy Group (wecenergygroup.com), a component of the S&P 500, has nearly $29 billion of assets, 9,300 employees and approximately 60,000 stockholders of record.