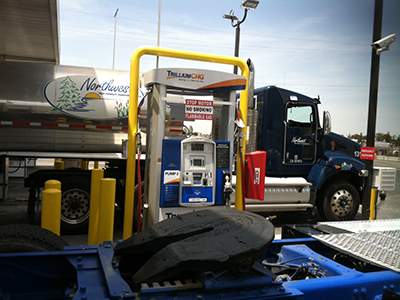 CHICAGO, Jun. 16, 2015 – Trillium CNG™, a business unit of Integrys Energy Group, Inc. ‘(NYSE:TEG)’ has been selected to design, build, operate and maintain a compressed natural gas (CNG) fueling station for the largest operator of CNG-fueled school buses in the country, the Los Angeles Unified School District (LAUSD). This will be the second CNG fueling station built and operated by Trillium CNG for the California school district.

The new facility, located at the district’s San Julian Garage near downtown Los Angeles, will feature 102 time-fill posts and a single fast-fill dispenser, with CNG dispensed overnight using two 150 horsepower compressors. This site is expected to deliver 500,000 gasoline gallons equivalent (gge) annually. Groundbreaking is scheduled in late July and Trillium CNG expects the new facility to be built and operating by October, 2015, Trillium will maintain the station for the next 15 years.

Trillium CNG currently owns and operates a CNG station that it designed and built for the exclusive use of the LAUSD in January, 2000. The existing station is located at their garage in Gardena, California. Trillium CNG leases the premises from the District.

“It is a privilege to be working with the largest operator of CNG-fueled school buses in the U.S., “said Mary Boettcher, president, Trillium CNG. “The Los Angeles Unified School District was an early adopter of CNG for school buses and has realized for over a decade the economic and environmental benefits of using an American transportation fuel. We value our 15-year working relationship with LAUSD and look forward to constructing a second fueling location near downtown Los Angeles, and making sure it operates safely and reliably for another 15 years.”