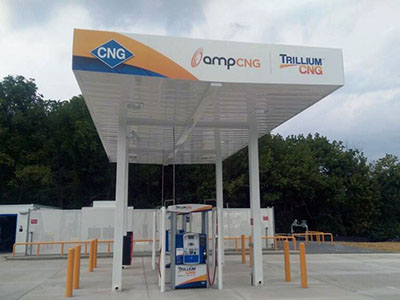 BROCK & KERRVILLE, TX – May 27, 2015 – amp Trillium, LLC, the joint venture between ampCNGand Trillium CNG, today announced that it has opened two new public-access compressed natural gas (CNG) stations in Texas. Located at I-20 330 FM 1189 in Brock and I-10 3050 Fredericksburg North in Kerrville, the stations will operate 24 hours a day, seven days a week and are easily accessible by Class-8 trucks.

The opening of these two stations in Texas affirms amp Trillium’s commitment to creating a nationwide network of CNG refueling stations along trucking corridors throughout the United States. Together, Chicago-based ampCNG and Trillium CNG now operate seven CNG stations across Texas and 19 CNG stations across the country. The new stations in Brock and Kerrville bring necessary refueling locations to the I-20 and I-10 corridors, respectively.

Donna Rolf, President of ampCNG, said: “Since September 2014, the number of natural gas fueling stations in Texas has increased by 25 percent. We’re working hard to enable the use of CNG throughout Texas and are excited to have come one step closer with the opening of these new stations in Brock and Kerrville.”

Mary Boettcher, President of Trillium CNG, added: “The amp Trillium CNG network in Texas enables us to meet the rapidly increasing demand for CNG in the state. The fuel’s low cost and low carbon emissions coupled with the reliability of our high-performance fast-fill network make natural gas an ideal alternative to petroleum-based fuels for fleets in Texas.”

The new stations, which are capable of fueling three Class-8 trucks simultaneously, will primarily service CNG trucks operated by haulers for the dairy industry.

amp Trillium is a joint venture between ampCNG and Trillium CNG formed in 2012 to build a network of CNG stations across the U.S. that serve the commercial trucking industry.

ampCNG is on a mission to displace liquid fuels with compressed natural gas by building and owning ultra-fast-fill CNG fueling stations for long-haul truck fleets across the United States. Based in Chicago, the company is building a nationwide network of CNG stations to supply major businesses and fleet operators with cost-effective, clean compressed natural gas. ampCNG is a member of the Department of Energy’s National Clean Fleets Partnership, which works with large private fleets to cut petroleum use and reduce the nation’s dependency on imported oil. For more information, visit www.ampcng.com.