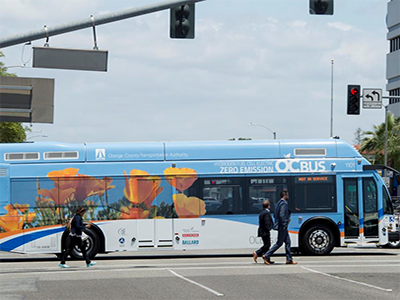 “While compressed natural gas remains a high priority for Trillium, diversification of Customer needs, products and services within the transportation industry is driving our expansion,” said Bill Cashmareck, managing director of Trillium CNG. “Each alternative fueling source has its own set of benefits, and we want to meet the needs of our Customers in as many ways as possible.”

What exactly is a hydrogen fuel?

According to the United States Department of Energy, “Fuel cells are similar to batteries in that they produce electricity without combustion or emissions. Unlike batteries, fuel cells do not run down or need to recharge—as long as there’s a constant source of fuel and oxygen.”

One notable advantage to hydrogen fuel cell technology is the lack of tailpipe emissions-only water is released.

Trillium will install fueling at OCTA’s Santa Ana facility, which is capable of fueling transit buses with approximately 35 kg of hydrogen per bus in 6-10 minutes simultaneously from two fueling lanes. The hydrogen fueling will take place in the same fueling lanes OCTA currently fuels their CNG buses. The 2400-hp CNG fueling station was designed, built and maintained by Trillium in 2007. OCTA’s hydrogen bus fleet will start out with 10 hydrogen electric buses, but the Trillium station is capable of providing the same fueling performance for a fleet of at least 50 buses without any further upgrades. To further expand the hydrogen electric bus fleet would require minimal upgrades to avoid any degradation in fueling performance.

“OCTA has a long history of implementing clean sustainable technology into our fleet and as we look toward the future, it’s important we continue expanding these efforts,” said Cliff Thorne, OCTA’s director of maintenance and motorist services. “What’s critical is ensuring that we meet the needs of the agency from an operational perspective and continue delivering high-quality transit service for our riders.”

Construction of Trillium’s inaugural hydrogen project in Southern California is slated for summer 2018.