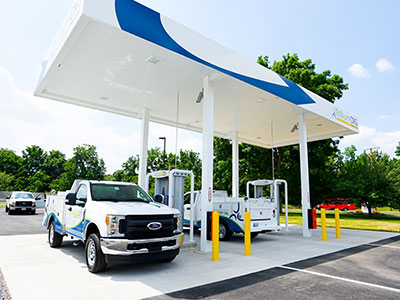 One of the most commonly cited reasons fleet owners give for not switching to alternative fuels like compressed natural gas is the lack of available fueling stations. Here's the good news if that concern has kept you from making the switch to CNG:

A growing number of fueling stations across the country are including CNG in their fuel offerings, including privately owned facilities catering to the public's demand for alternative fuel. Continued demand from fleet owners will lead to even more service stations making CNG pumps available across the country.

The number of public fueling stations across the country offering CNG hovers right around 950, but more and more companies are adding CNG to their fuel offerings, according to the U.S. Department of Energy. For example, Trillium CNG and its parent company, Love's Travel Stops, have CNG available at more than 60 fueling stations, 27 of which are full-service travel stops, with plans to add more.

California leads the nation in the number of CNG fueling stations with 172, and Oklahoma, with 101 stations, is the only other state to surpass 100 locations. Texas claims 82 CNG stations.

CNG stations are not limited to a specific region of the U.S. The South also claims a growing number of CNG stations, with North Carolina, Georgia and Florida each offering 25 or more. The Pacific Northwest has been a bit slower in adapting a CNG mindset, but with companies like Matheson Postal Services and PepsiCo’s Frito-Lay division, these states have begun to add CNG as a fuel option.

In addition to public stations, the DOE estimates there are another 742 fleet-owned CNG stations. While these may not provide additional public access, this growing number of private facilities continues to serve as a reliable indicator of the growing popularity of CNG as a fleet fuel.

Emerging fuel and vehicle technologies, coupled with greater CNG demand continues to serve as a catalyst for additional CNG stations in the U.S.

With Trillium CNG continuing to expand its CNG footprint across the country, we provide fleets with greater access to the fueling resources needed to keep their businesses moving.